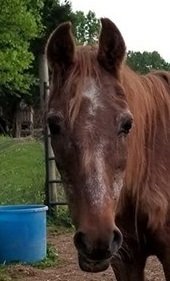 Isaac, aged aged aged (30s) chestnut pony, and farm favorite. Issac was purchased from Fishers Auction house. He was being advertised as a child safe pony. At his age, it’s not even safe for him to walk around much less put a child on him. He weight, as with most seniors, fluctuates but he happily eats more than any other horse on the farm; soaked of course. Issac appears to have something neurologic going on so, despite his wishes, he is kept in a paddock with our minis, and only let out when we are there to watch over him.