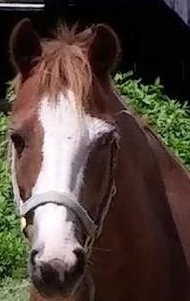 Kringle, aged (mid-late 20s) chestnut pony, arrived in December 2016. Kringle was our Christmas pony. He was found in the pens being weighed and tagged for shipment. We were called and asked if we would be willing to bail him because they weren’t allowing him any more time and he was leaving in the morning. Well we couldn’t’ let his Christmas be ruined so we got a shipper to pick him and he spent Christmas in a cozy quarantine stall. Much like his pal Max he is untrusting of humans so they are the perfect companions.