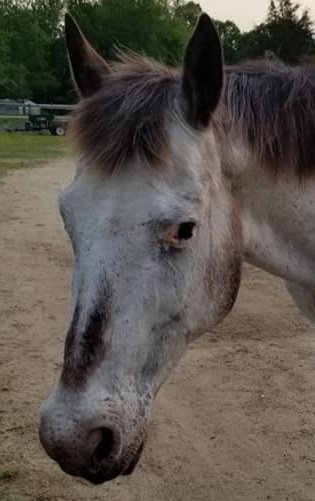 Tehcumseh, aged (mid-late 20s) appaloosa gelding, arrived in September 2018. Much like many of our other horses we was found in a pen in PA, but this guy was originally going to be euthanized rather than placed. His right eye was severely infected and needed to removed and he had a bad knee; virtually unplaceable, but we pled his case and were given the chance to take him. After arriving, the vet scheduled a date to remove his eye, which went perfectly. He recovered and now the “one eyed wonder” with diminishing sight in his other eye has a best friend and see eye horse to guide him around.