THE WHY OF HORSE RETIREMENT/SANCTUARY... THIS ♡
In the late 1980's a young horse named Traveller was bought as an eventing partner for me, a high school student looking to event at the next level. Most eventing horses have good confirmation, stamina and bloodlines suited to the sport; Traveller did not. He was a long-backed, pigeon-toed Percheron Morgan cross, but he had heart, spirit and was all mine. Traveller came to college with me, then went on to reteach my mom how to ride until his ringbone became too much and he needed to retire.

In 2004, a 34-acre farm in Maryland was purchased specially for Traveller's retirement. At the time there were very few places taking in senior horses willing to deal with end of life issues that wouldn't break the bank. Travellers Rest Farm was established and since that time the farm has taken in horses of all breeds, from all backgrounds with a range of physical and psychological issues. Every horse is treated like our own. In fact, we live right on the property. The retired horses are fed unlimited hay, given dry shelter and warm blankets and most importantly, they are loved and treated with respect. All our horses are kept in small groups so there is no over-crowding or competition for food. They are able to form life-long bonds, and remain with us until they pass.

Tri Towers retired from racing in 2003 after 78 starts and $119,448 in earnings. Once his earning career was over, he was sold and ended up at an auction and eventually a kill pen in Shippensburg, PA. Sadly, this was the fate of many. Luckily for Tri the University of Maryland Equine Studies program was seeking to develop best practices in the feeding of emaciated horses and purchased Tri for their study. At the time of his purchase it was determined his Body Score was between 1 and 2 on a scale of 1 - 10. After weeks of feeding he recovered, but the years of racing left him physically broken down and incapable of being ridden. He had ankles the size of large naval oranges, and a body and spirit so worn and tired he was incapable of fending off the herd for a simple bite of the hay bale.

Tri Towers needed salvation. Travellers Rest Farm's founder, Beth Kokoruda, first learned about Tri from reading his biography on University of Maryland’s website. She learned that despite the best intentions of the University and the students that worked so hard to rehabilitate him, his poor body could no longer be counted on to carry the weight of a rider. “I’m a sucker for a horse with a story, and when I saw his picture?he’s just a plain brown horse with a small white star, there’s nothing flashy about him at all?and I read his story, I looked up his race record, and thought, man, this horse just needs a break.” So, in August 2004 Tri Towers was brought home to be Traveller's companion.

"Every morning when I left my house he greeted me at the fence line with a beautiful melodious sound that was part whinny and part nicker. I call him my songbird,” she says. “He has this beautiful little whinny, which is really a quiet song. And in the morning when I come out to my car to head to work, he’ll sing to me when he sees me - it makes it all worth it.”

Since agreeing to give a home to Tri Tower’s, Kokoruda has offered a retirement home to other aging horses. It is her second full-time job, supported by her full-time career at the Patuxent River Naval Air Station. “I feel obligated to help Tri, and others like him, complete their journey. Tri was a horse who has given, given, given, and people have taken, taken, taken,” she says. “This is my way to give something to a horse who didn’t have it as good as some other horses.”

Today, Travellers Rest Farm Sanctuary has been established as a non-for-profit dedicated to providing permanent sanctuary to senior, blind, retired, permanently disabled and other unwanted horses and ponies. We rely on donations to support the horses in our care. We are 100% volunteer run and take in as many horses as space and funding allows. Each horse that arrives remains with us until they pass. 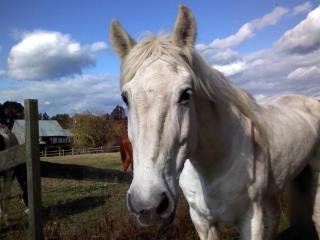 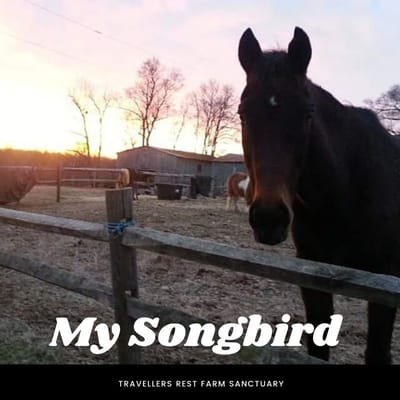