2021 marked 12 years since the passing of Traveller, a beloved friend, companion, partner in crime.

This steel grey horse was three at the time of his purchase in the late 80's. He didn't fit the mold of what a three-day eventing horse should look like; a pigeon toed, long backed Percheron Morgan cross that was green under saddle and had a presence all his own. It was love at first sight. He warranted a name to resemble his strength and courage, so he was named after the beautiful war horse Traveller - yes with two "Ls".

We navigated the eventing world with our interpretation of how it should be done. He went to college with me then got my mom back in the saddle until his ringbone became too much and he needed to retire. Travellers Rest Farm was purchased with his retirement in mind.

He taught me so much about kindness without expectation. We worked as a team even through his later years when he couldn't get up by himself and we had to rig up our own system for getting him talk - now that was a sight, but he trusted me and we got it done. When it was time to say goodbye nothing was harder, but his body was failing him and it was time. The days pass but his absence is still felt. He was a once in a lifetime friend. Rest easy my friend - you are terribly missed. We carry on helping other senior horses that need a soft landing in his memory. 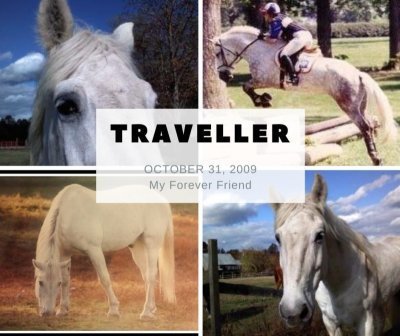